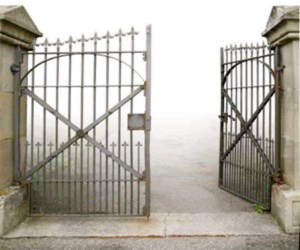 In Matthew 16, Jesus asked Peter a question that rings through the corridors of the centuries, “But who do you say that I am?” We all have to answer that question. Our eternity hangs on the answer. Peter acknowledged that Jesus was the Christ. Jesus was the One that was promised from the Fall.

At that point Jesus blessed Peter and then promised that on this rock, on this truth, I will build My church and the gates of hell will not prevail against it. This promise was fulfilled in a tangible way in Peter’s lifetime. This is also a promise to us as we live and move in acknowledgement that Jesus is the Lord. How so?

In Acts 12 we learn that Herod arrested Peter and locked him behind bars. He has the intention of executing Peter. As the people of God prayed, an angel visited the prison. The celestial visitor woke Peter, lit up the room, had Peter stand, removed his chains, allowed him to dress, walked him by two guard posts, then led him out through the iron gates that held him. The gates opened of their own accord. It seems Jesus was fulfilling His promise that those confining gates, those “gates of hell” would not prevail against Peter and the mission for which Peter was called.

The Lord is still capable of opening gates that evil shuts. Jesus is able to help us overcome whatever are our biggest life-challenges. All so we can make a radical Kingdom impact. See how a small step can make a big difference. Login at missionnext.org

Other related posts and pages:
Serve Him with All Our Being
Working Through Barriers
Your Faith & The Impact of Intimacy
Lord, Increase My Faith
Journey Partner Ministries