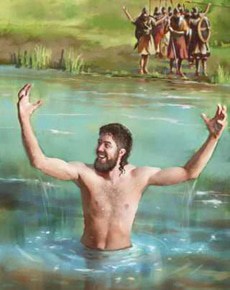 Someone I looked up to as a successful marketplace and ministry lay-leader once told me, “I don’t want to be involved in anything unless it is a big deal.” I rather liked that idea and adopted it as my own. After all, we have a big God, and we can trust Him to accomplish big things.

What should the attitude of our mind and heart be to serve the master well? In 2 Kings 5 we read that Naaman was a leader of leaders. He had organized great conquests. Then a detour occurred in his life that would lead to a dead end. He got leprosy, the cancer diagnosis of the day. Naaman was counseled to visit the prophet Elisha. Overcoming his reluctance, he expended the effort to travel to the prophet’s home. Naaman sent a servant ahead to announce his arrival and expected that Elisha would be fully attentive to him as a person of great renown. Elisha, however, did not come out to meet him. He simply sent instructions for Naaman to go to the Jordan and wash there seven times.

Naaman was incensed! The prophet was not honoring him with a meeting, the Jordan was dirty, and the assignment made no logical sense. Naaman stormed off. Had the prophet instructed Naaman to do some great exploit, he would have done it. But why should the great leader humble himself to that extent? Naaman’s attendants reasoned with him and convinced him he had nothing to lose. Naaman did humble himself; he went to the Jordan, washed seven times and was healed. He was healed of his affliction of the flesh and of his proud spirit.

What can we learn from this? If we humble ourselves and give ourselves over to the Lord to do whatever He asks, the Lord can do amazing things. He will work in us and through us to multiply our efforts to accomplish anything he puts on our hearts. We have a big God. We can take on assignments that are a big deal—assignments that are one or more rungs above what we can reach in the flesh, so we know the Lord is involved.

Mission is about what the Holy Spirit is doing through us, but we must humble ourselves and give Him full control. One way to react is to register or login at Journey.

Nelson is the generic Evangelical baby-boomer. Born in 1946, raised in the C&amp;MA, he attended Urbana ’67 in college. He holds an MS degree in Chemical Engineering and worked in R&amp;D positions in American industry for 33 years. Nelson is an inventor with formal training in methods of creative problem-solving. He was a founding elder at Walnut Hill Community Church in Bethel, CT (1982) and served in many leadership capacities of what is now one of the largest Evangelical churches in New England. In 1998 Nelson founded the Finishers Project, now MissionNext, in program development. Locally he attends a Torah study and is chairman of the sewer commission to serve among unchurched leaders.