The Bible as a Puzzle 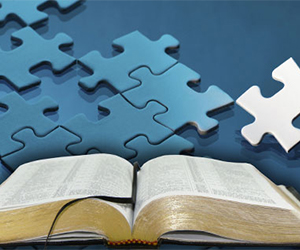 The challenge is to take the whole counsel of God and fit it together as a giant puzzle. All pieces should fit in. Recently, a movement of Christians have come to regard the red letter passages as more important than the rest of scripture, for example. That is dismissive of the full counsel of GodAll Scripture is given by inspiration of God, and is profitable ... 2 Tim 3:16. It is like having a 1000-piece puzzle and leaving out 50 parts. It is incomplete.

The temptation by Jewish scholars is to regard the Torah (Pentateuch, the Law) as having a higher value than the rest of the Hebrew scripture. With that view of scripture, Job is regarded by some Jewish thinkers as a mythical character, uncomfortable parts of Isaiah are dismissed, and early stories that don’t seem to fit their view of God’s character are questioned, such as the account of Cain and Abel.

But these critical views of scripture miss the meta story of God’s message. For instance, there is the example of bad behavior of Cain against is brother; Esau and Jacob against each other; the treachery against Joseph by his brothers selling him into slavery; the betrayal of Delilah against Sampson; and the plot against Daniel by those jealous of his position. All of these fit into the narrative as to why redemption is needed.

Then there is the story of Babel. That project was shut down by God because they wanted to make a name for themselves instead of giving honor to God. Genesis 11:4Come, let us build ourselves a city, with a tower that reaches to the heavens, so that we may make a name for ourselves

The Apostle Paul writes, “Now to him who is able to do immeasurably more than all we ask or imagine, according to his power that is at work within us, to Him be glory …” (Eph 3:20-21a) Imagine asking God for a significant role and being used by Him! He is waiting for that conversation.

We have a choice with our lives to demonstrate Godly relationships as a testimony to the good news. A high purpose of our lives is to know Him and make Him known. With the resources we have, our question should not be “What can I spare?” but rather “What is it going to take?” to make the living God famous, thereby bringing glory to Him. Explore how you might be involved in God’s global cause with options that are a surprisingly good fit. Register or login at missionnext.org and complete a profile with your criteria for serving with your considerable skills. Match to organizations and specific jobs by leading mission organizations.