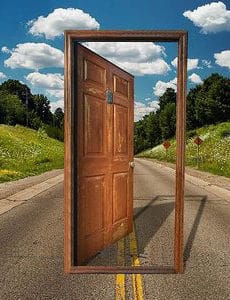 Many people seem to freeze at the notion of serving in ministry because they have no sense the Lord is calling them; doors do not seem to open. It is lost on us that the Lord implores us to go out into the highways and byways of life and compel them to come.

Jesus gives us a hint on how to see doors opened for us in this familiar passage found within the Sermon on the Mount.

One reading is that if we are expecting doors to be opened, we must be doing all three – asking, seeking, and knocking—to see doors open. (Recall that the original Greek had no punctuation. Punctuation is the choice of the translator.)

Many folks are stuck wondering if it is the Lord’s will to take on a ministry opportunity. Question: Are you asking, and are you seeking and are you knocking to see doors opened for something you are passionate about?  In light of this passage it seems out of order to speak about unopened doors. “For everyone who asks receives; he who seeks finds; and to him who knocks, the door will be opened.”  Those that do not stop asking, seeking, and knocking are convinced the Lord has too much fun opening doors. He does so with great delight.

Choose to be asking, seeking, and knocking to see doors opened for a kingdom-expanding result. The Apostle Paul and others who have been effective in ministry over the centuries have done so. Let’s join them!

Create an account at MissionNext and see what doors open for you to make a difference in the halls of eternity.

Nelson projects himself as the generic Evangelical baby-boomer. Born in 1946, he was raised in NJ in a Christian family. He holds an MS degree in Chemical Engineering and served in positions of R&D in American industry for 33 years. Nelson is an inventor and has formal training in methods of creative problem-solving. He was a founding elder at Walnut Hill Community Church in Bethel, CT (1982) and served in many leadership capacities of what is now one of the largest Evangelical churches in New England. In 1998 Nelson founded the Finishers Project, now MissionNext. The initial launch was in the form of Finishers Forums. Soon after a web presence was created as a connecting tool. Nelson also serves as an on-line missionary with Global Media Outreach. Locally he attends a Torah study and is chairman of the sewer commission to work with the unchurched.