On Track or Side-Tracked? 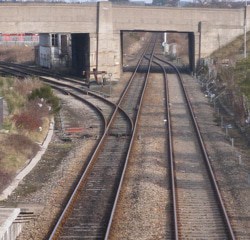 “Oh, so you have built a tower, have you? What will you think of next?” According to some commentators, that is the sense of the voice found in Genesis 11 when God comments sarcastically on the futile efforts of men and women to make themselves big and important.

A Canadian friend tells of a former marketplace leader, the president of a substantial company, a Christ-follower, who retired to pursue the dream our culture says he “deserved.” It was a life of leisure, traveling with his yacht between Vancouver and New Zealand. A few years into that lifestyle, he began wondering if the Lord might have something more for his life. He did.

That might be a little extreme, but here we are – the healthiest, best-educated, and some may argue, the wealthiest generations ever to walk the earth. We have the life experience to bring grace and truth to a world in crisis, using our skills in education and engineering, mentoring and management. And we have a direct assignment from the Lord to disciple the nations. But what is He to do when we, the potential rescuers, get side-tracked and drift off with indifference and inattention?

Another gentleman from Canada attended a MissionNext event. He and his wife decided they would offer their skills and go out to the nations. They went first to Indonesia, then to Malaysia. His wife died of cancer later that same decade, but he reported, “Those were the best years of our married life.”

If we can hasten the day of His coming, then we can certainly also delay it. We can be involved in God’s global cause or miss it.  Are you on track to hasten His return or are you side-tracked? What are you planning for the next stage of your life? Why not register or login on MissionNext to find a track that is surprisingly well-suited to you?

Nelson is the generic Evangelical baby-boomer. Born in 1946, raised in the C&MA, he attended Urbana ’67 in college. He holds an MS degree in Chemical Engineering and worked in R&D positions in American industry for 33 years. Nelson is an inventor with formal training in methods of creative problem-solving. He was a founding elder at Walnut Hill Community Church in Bethel, CT (1982) and served in many leadership capacities of what is now one of the largest Evangelical churches in New England. In 1998 Nelson founded the Finishers Project, now MissionNext, in program development. Locally he attends a Torah study and is chairman of the sewer commission to serve among unchurched leaders.