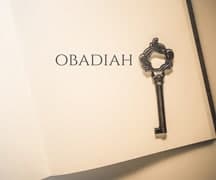 The book of Obadiah is largely ignored. Why? Well, it is in the Old Testament, it is in the Minor Prophets, it is about a people long gone, and it is a small book. But why is it there? It has a major message.

On the surface it is a battle between brothers Edom (Esau) and Israel (Jacob). But in the larger picture, it is a battle between good and evil, between the spirit and the flesh, short-term pleasure and eternal reward. It is the power of man against God – heaven against hell. Notice that the Herods and Romans were Edomites.* Herod the Great tried to kill Jesus with the slaughter of the children. [tooltip text="When Herod realized that he had been outwitted by the Magi, he was furious, and he gave orders to kill all the boys in Bethlehem and its vicinity who were two years old and under, in accordance with the time he had learned from the Magi. Then what was said through the prophet Jeremiah was fulfilled: "A voice is heard in Ramah, weeping and great mourning, Rachel weeping for her children and refusing to be comforted, because they are no more.""]Matt 2:16-18[/tooltip] Esau vs. Jacob was part of the Christmas story.

The Edomites were gloating and assisting in the demise of Israel during the Babylonian conquest of 586 AD, looking after their own short-term interest over God’s plan. It started with Esau looking after himself and selling his birthright for a bowl of red porridge, thus rejecting God’s plan. For Esau it was the lure of short-term gain of the flesh, the here-and-now, and immediate comfort over the long-term joy God has promised as was the perspective of Jacob.

Jesus instructs, “Do not store up for yourselves treasures on earth, where moth and rust consume and where thieves break in and steal; but store up for yourselves treasures in heaven, where neither moth nor rust consumes and where thieves do not break in and steal. For where your treasure is, there your heart will be also.” [Matt 6:19-21 NRSV]

How far out is the horizon of your perspective? Explore how your life can make a kingdom difference in the halls of eternity. Login or register at MissionNext to take a next step by connecting with organizations that can use you in God’s global enterprise.

*Edomites were called Idumeans (Mark 3:8... hearing all that Jesus was doing, they came to him in great numbers from Judea, Jerusalem, Idumea, beyond the Jordan, and the region around Tyre and Sidon.) and from them came Herod the Great.

Nelson is the generic Evangelical baby-boomer. Born in 1946, raised in the C&MA and attended Urbana ’67 in college. He holds an MS degree in Chemical Engineering and worked in R&D positions in American industry for 33 years. Nelson is an inventor with formal training in methods of creative problem-solving. He was a founding elder at Walnut Hill Community Church in Bethel, CT (1982) in what is now one of the largest Evangelical churches in New England. In 1998 Nelson founded the Finishers Project, now MissionNext, and serves in program development. He has been in 45 countries to work with leaders of leaders and see multiple cultures first hand.